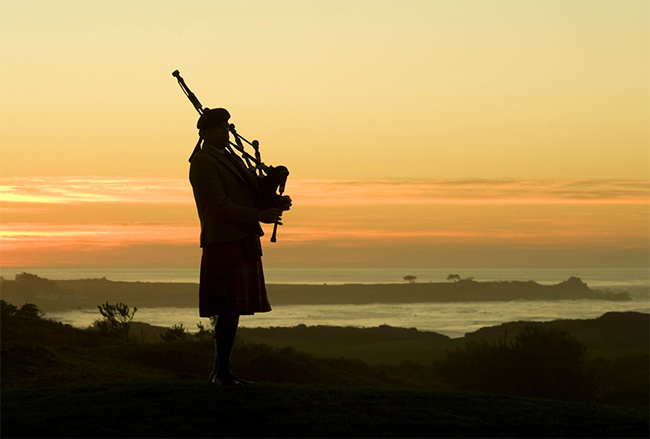 The Great Highland Bagpipe, or Great Highland War Pipe, is a uniquely Scottish instrument that can trace its roots back to Egyptian, Greek, and Roman times. It is the largest and loudest of the pipes in the world. Considered a martial instrument, it was utilized considerably by Scottish military regiments through World War II. Because of the changes in military strategy since then, it is now primarily used for ceremonial and entertainment purposes.

The bagpipe is a woodwind instrument with four reeds. A chanter double reed provides the melody while three drone single reeds provide the harmonic hum. The bag is a reservoir of air that the piper alternately blows and squeezes to produce a steady sound.

Beginning pipers will purchase a practice chanter, an instrument similar to a recorder with a double reed. The chanter has nine notes with no sharps or flats. Tunes are embellished with grace notes.

You will learn to play marches, strathspeys, reels, hornpipes, jigs, and slow airs. You will enjoy the “quickening of the crowd” as you add your skirl of the pipes to both ancient and modern tunes.

Traditionally, pipers are valued members of the Scottish communities and are always crowd pleasers.

The drum section consists of snare, tenor, and bass drums.

The snare drum, or side drum, provides the cadence for marching and a rhythmical accompaniment to the pipe music.

Drums are provided. Drummers only need to purchase sticks and a practice drum pad.