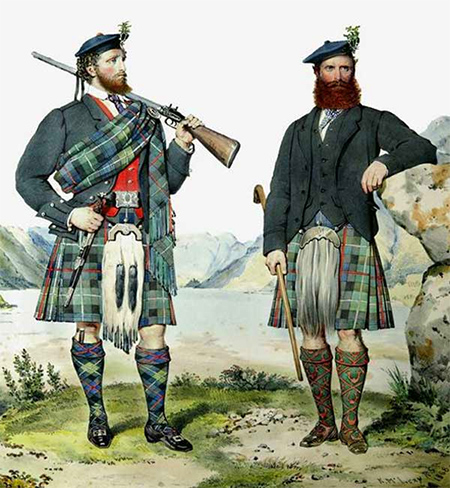 We have chosen the Ancient MacKenzie tartan for the beauty and elegance it brings to the band.

From the Gaelic "Maccoinneach" meaning "fair, bright one", the MacKenzies are thought to descend from the ancient royal house of Lorn.

The Mackenzie Tartan is the regimental tartan of the Seaforth Highlanders, which were raised by Mackenzie, Earl of Seaforth in 1778.

The Mackenzie tartan as we know it today is a military tartan and was developed by the Mackenzie Lord MacLeod's 73rd Highland Regiment (and continued later by the Seaforth Highlanders), which was taken from the an early version of the Black Watch (developed about 1729) and had Black, White and Red lines added. In fact, most clan tartans today were developed since the military Highland Independent Companies introduced the idea of using the pattern for identity between 1725 and 1739. With exceptions there are very few examples of tartan patterns being used for clan identity prior to 1700, moreover it was the cap badge, usually a plant or ribbon, which was used for identity. However there is evidence that regional tartans existed. This would explain why different tartans were seen being worn by the same clan at the battle of Culloden.